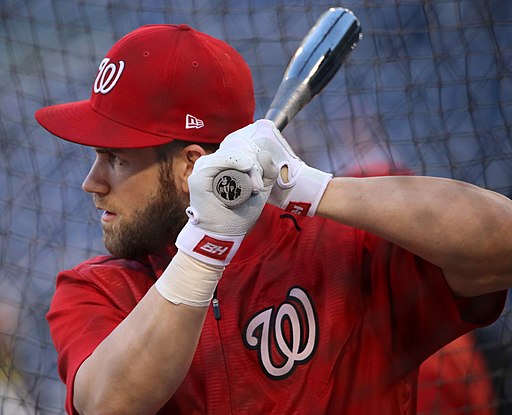 Choosing where to live is one of the most important decisions we make on this journey we call life. Do we embrace the familiar comfort of the small town where we grew up, or do we strike off for fame and fortune in the big city? Do we celebrate new advances in home snowblower technology, or do we opt-out of winter entirely on a houseboat in the Keys? Choosing where to put down roots is an intensely emotional choice. But for some of us, it’s a tax-planning choice, too.

Bryce Harper is a baseball player who lives in his native Las Vegas. Up until last season, he played right field for the Washington Nationals, where he became the youngest National League MVP ever. He’s especially good at hitting home runs on Opening Day, and was the first player to hit five home runs in Opening Day games before age 25. Last year, Harper made $21.65 million for his effort, which means the umpires at the IRS will be rooting for him all season long.

Harper is 26 now, with a new wife and probably a family on the way. Time to come to the mound for some adult financial planning, right? And so, on March 2, Harper signed a 13-year, $330 million contract with the Philadelphia Phillies. It’s the biggest free-agent deal in American sports, and works out to $156,695.16 per regular-season game. Remarkably, it wasn’t even Harper’s highest offer — the Giants offered $312 million over 12 years, while the Dodgers reportedly dangled north of $35 million per year.

But Harper’s choice is a great example of tax planning. The California offers Harper let go may have looked more generous than the Philly pitch he swung on. But California beans players with a 13.3% tax on income over $1 million, while Pennsylvania caps its tax at just 3.07%. Think of the Philadelphia pitch as a meatball down the middle, while the California offers were more like hanging sliders.

Harper won’t escape California tax entirely. He’ll pay whatever “jock tax” applies to income from road games, which means paying the California rates when he visits National League rivals in San Francisco, Los Angeles, and San Diego. But the difference could mean Harper keeps tens of millions more in Philadelphia than in California.

Baseball players aren’t the only 1%-ers to consider taxes in their decisions where to work. In 2016, hedge fund manager David Tepper, who earned $6 billion from 2012 to 2015, fled New Jersey for Florida. His move could cost the Garden State hundreds of millions in tax. The Tax Cuts and Jobs Act of 2017, which caps deductions for state and local taxes at just $10,000, has nudged residents of high-tax states like New York and New Jersey to consider sunnier tax climates in Florida, Texas, and Nevada.

And Harper can be glad he’s not facing even tougher choice-of-venue questions. For example, the Supreme Court just agreed to decide whether North Carolina can tax the undistributed income of a New York trust based on the beneficiary’s residence in North Carolina. Now, that may sound like a boring technical question. (Ok, it is.) But it’s the kind of debate that gets the coolest kids in the Tax Club really excited.

The bottom line here is important whether you’re at the plate or just watching from the stands. Every financial decision you make has at least some tax consequence. And the choices you make today can produce home runs for season after season. So make the smart choice . . . come to us for a tax plan, and see if we can help you hit it out of the park!